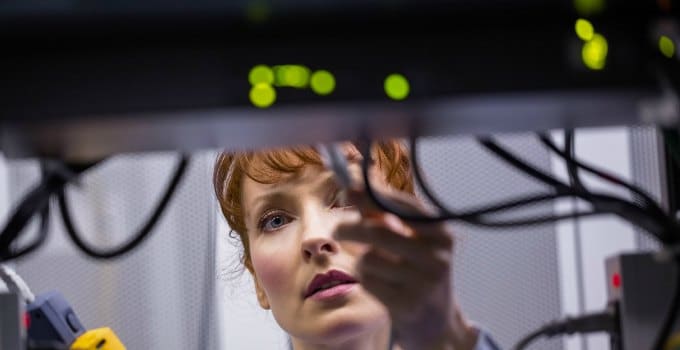 At Intel’s keynote at this year’s Consumer Electronics Show (CES), CEO Brian Krzanich announced the company had met its goals for diversity hiring for 2018, with 43% of its new hires comprised of either women or other underrepresented minorities within the company and retention rates for these employees being on parity with non-diverse employees (read: white males). Krzanich then detailed Intel’s plans for 2019, wherein they’ll invest in programs to get more students into STEM fields, produce a semi-annual diversity and inclusion report for public release (the first one launches in February) and team up with Vox Media, Recode and the Born This Way Foundation to invite tech and media leaders to fight online harassment. Intel’s goal is to drastically change the dynamic in the tech industry by 2020, a bold plan that highlights just how powerful companies can be when they put their might behind a good cause. But what about the rest of CES? Is everyone else as progressive and forward-thinking as Intel has proved to be?

Before we can answer those questions for 2019, we need to look at CES’ history, specifically its history surrounding the representation of women. Over the past few years, CES has gotten flak for its allowance of the infamous “booth babe” on the show floor. If you’re unfamiliar with the concept of a booth babe, they are women paid to dress in often tight-fitting and revealing clothing and stand near or hold a product, kind of like a living, breathing pedestal. Except that pedestal is a person. Of course, this practice is justified under the age old adage of “sex sells” (it doesn’t), and it’s continued into modern times, even though we’ve supposedly grown more progressive as a society. You might think, well Jes, having them around can’t hurt; they’re just pretty women helping to sell a cool product! Actually, booth babes have made it difficult for women to be taken seriously on the show floor at all, with female CEOs being mistaken for booth babes and then dismissed by their male counterparts. Booth babes reinforce the idea that tech is a man’s world, which makes it harder for women to break into tech and contribute their own unique perspective to the industry.

The coverage of CES doesn’t fare much better when it comes to women. The search term “ces 2019 women” turns up fashionable tech accessories and oral sex toys with little coverage of the actual women at the event, like GM CEO Mary Barra, who presented a keynote on her company’s 2019 forecasts and products. If we do a Google image search of “women at ces,” we get images of Huawei’s new smartwatch “for women” (because it has diamonds in it) and pictures of scantily-clad women posing with or near products. This isn’t directly caused by CES — it’s indicative of the culture of the industry as a whole — but CES could be doing a whole lot more to promote the women creators and business owners who are working their asses off in a male-dominated industry bombarding them with the message that they don’t belong.

CES’ issues with women have been addressed before in panels and articles corroborating the convention’s lack of regard to gender equality. Again, this is another symptom of the tech industry’s domination by men, but it manifests so strongly at CES, where more than a 100,000 people are packed into a convention center, providing an exceptional sample size of the tech industry’s population. With last year’s keynote speakers numbering 19 men to three women (and all of those women were on the same panel), it’s apparent CES hasn’t, in previous years, attempted to close the gender disparity gap.

While the convention itself isn’t to blame for sexism in the tech industry, there appear to be no initiatives to encourage non-sexist behavior. Both last year and this year, LG hosted an event called “LG Mom CES,” which is a breakfast for female bloggers (presumably with a family focus) to listen to product information regarding home appliances, like refrigerators and washers. Is it safe to assume that LG doesn’t think dads and childless folks do not need to eat or wash clothing? No, obviously not, but the event itself is posed as a “for moms” event, as though moms are the only ones working in the home performing chores. The event has been heavily criticized on Twitter (#LGMomCES) with little to no response from LG regarding it.

Opposite the LG event, we have the Intel (partnered with Essence, People and People en Espanol, all Time, Inc. properties) sponsored Women Who Spark Awards, celebrating women who have made strides to improve the industry and innovation in technology. This year, four women were honored: Alba Colon, Chevrolet Racing Program Manager, NASCAR Sprint Cup Series; Kimberly Bryant, CEO of Black Girls Code; Telle Whitney, CEO and President of the Anita Borg Institute; and Shantell Martin, visual artist. The ceremony was opened by the US Chief Technology Officer, Megan Smith, and the event serves to honor women in the industry, acknowledging their accomplishments and encouraging others to follow in their footsteps. The event stands in incredibly stark contrast to the smattering of booth babes on the show floor, still a mainstay of unimaginative marketing professionals. How can CES claim to support honoring women when they condone the use of women’s bodies as tools to sell products? Kind of a conflicting message to send to all the Girl Scouts on the floor this year doing interviews for the #GenSTEMGirls campaign: we want women in tech but only if you’re properly packaged for male consumption. Other conventions, like the Penny Arcade Expo, have outright banned the use of women as sales tools at company booths, and it hasn’t hurt their attendance one bit (or the gaming industry’s profits).

We reached out to CES to ask what kind of initiatives the trade show provides to uplift women in the industry, but they could not be reached for comment (although they did introduce a policy in 2013supposedly “discouraging” the use of women as sales props). Since we couldn’t be there ourselves, we also asked professionals on the show floor about the general atmosphere and treatment of women at the convention. While we couldn’t get an official comment from CNET Editor-in-Chief Connie Guglielmo, this is what she had to say regarding booth babes at CES 2019 on Twitter: 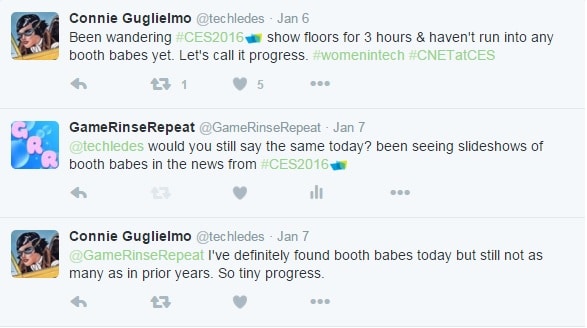 Is “tiny progress” really enough when we have Intel leading the charge with a $300 million investment in promoting women in tech and directing an initiative to prevent online harassment?

This year’s show proved disjointed in its message to women in tech: on the one hand, they were welcomed with the inaugural ceremony of an award show that celebrates women in the industry, and on the other, the show floor, with its booth babes and male dominant population, did little to improve upon previous years of women’s invisibility in the industry. It’s a clear example of talking a big talk while not walking the big walk. There are baby steps happening here, but there’s no reason CES can’t go whole hog and openly promote women with its agenda. After all, it’s the Consumer Electronics Show, and women account for about 80% of consumer purchasing in the world, so it seems a little foolish to stay mum on the subject of equality. CES positions itself as a vehicle for more than 4,000 businesses to showcase their wares, but with its influence on the tech industry, it could send an incredibly strong message regarding the lack of women in tech and do more to support women trying to break into tech.

ARE YOU A WOMAN WORKING IN THE TECH INDUSTRY? LET US KNOW YOUR EXPERIENCES IN THE COMMENTS BELOW!

The Experts Pick the Best Running Shoes of All Time
Walgreens Black Friday Ad Leaked!
Longwood Gardens Promo Code & Coupon
How Camping is the Answer for an Affordable Family Vacation
Overstock and Olympia Sports Black Friday Ads Leaked 2021
What is Green Monday Deals
How to Teach Finance to Teens
10 Fathers Day Gifts (For The Dad Who Has Everything)
All Coupons
Recent Posts
Categories