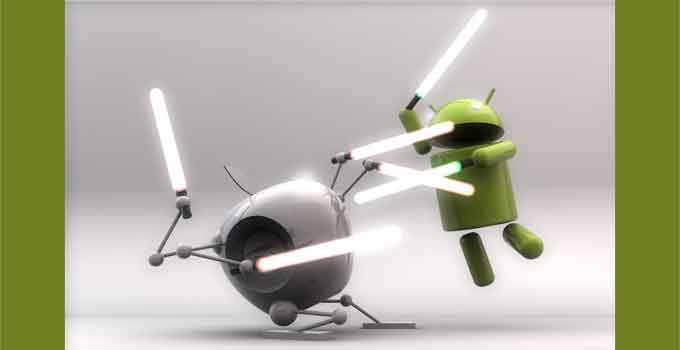 Way back in 2003, I liked my Motorola RAZR so much that when it was time to upgrade, I just got a new RAZR. Nowadays, buying a new cellphone is a lot more complicated. If you’re upgrading to a smartphone for the first time, the options and choices can be a little overwhelming.

The top contenders are the Apple (iOS) and Android devices. Both brands have very vocal and passionate fan bases, so customer reviews can seem like a war between factions. So how do you know which one’s right for you? Here’s a breakdown of the differences between iOS versus Android devices to help you feel comfortable making a choice.

THE HARDWARE ACROSS MAJOR MODELS IS SIMILAR

Apple and Samsung have focused their advertising on screen sizes. You can see from the chart below comparing two popular flagship devices that there isn’t enough meaningful differences to worry about when selecting a cellphone.

As you can see, both phones are very capable everyday devices. The iPhone 6 was released Sept. 14, 2014, whereas the Galaxy S6 was released April 10, 2015. This six-month difference explains why the S6 looks a little bit better spec-wise in the chart above. The iPhone 6S, released on Sept. 26, brings the device specs even closer, while the iPhone 6 Plus features a larger screen. The point is that you don’t really need to stress yourself out about the specs.

IOS VERSUS ANDROID MARSHMALLOW: WHICH IS BETTER?

The Android operating system version 6.0.0 was made widely available on Oct. 5, while iOS 9 was released Sept. 16. As far as aesthetics are concerned, both interfaces are very similar. They both have squarish icons you tap to launch applications. You interact with the phone using a touch screen using swiping and tapping motions. Other than a new font in iOS 9, there isn’t much of a change in interfaces from previous versions iOS 7 or 8 or Android Lollipop.

The iPhone, in my experience, is the easiest to use. If you are buying a phone for a technophobe or other person lacking expertise, the iPhone is intuitive to use, and there is very little to set up. If you already use iTunes or a Mac, setting it up is even easier. From there, the app store makes it easy to install whatever apps you’d like. The experience is consistent with iPads, and other iPhones. Once the iPhone is initially set up, that is all there is to it. You can change the wallpaper and move icons around, but at this point an iOS device experience will be uniform for all users. The settings are easy to find, and there are not a lot of them to change. For this reason, I often recommend the iPhone to people who just want a phone that works and won’t frustrate them with options they don’t want.

Android phones are almost as easy to set up as the iPhone. The wizard has you use or set up a Gmail account, and the interface that comes with the phone is fairly intuitive for the average user. Some more advanced features are tucked inside menus and take a little bit of work to find. I usually recommend Android to more tech savvy friends. Once you now your way around an Android device, the initial work and frustration comes with the perk of being more customizable. You aren’t shoe-horned into one messenger app, one app store, or one experience. One of feature of Android devices is being able customize the experience by modifying the operating system itself with after-market firmware replacements, or by using a different launcher. You can read all about Android Launchers in this c|net article. Basically, launchers allow you to modify the look, feel, and operations of your device. This is not available on iOS. The customizability, as you can imagine, can be a bit daunting.

Psychologist Barry Schwartz gives an interesting Ted Talk on how too many choices paralyze us. Sheena Iyengar gives another Ted Talk on a similar topic, the choice overload problem. iPhones are not simply just for people who are less experienced with technology. iPhones have the benefit of not being overwhelming because of a near infinite number of choices. Android devices have the benefit of having a near infinite number of choices. Whichever you prefer is simply the right choice for you. Neither is wrong.

Battery life is probably the most most important phone feature to compare. After all, all phones perform equally well with a dead battery. iOS has always been a little bit more battery-life friendly than Android. iOS devices tend to use a dual core processor, where as Android tends to use a quad core. Batteries for iOS devices can be optimized because it only runs on Apple phones, as opposed to Android, which runs on many models from many manufacturers. There is also a bit of a battery drain when Android closes apps because app processes may still run in the background.

Both operating systems introduced ways to extend battery life in their new versions. iOS 9 has a “low power mode.” The down side is that it has to be manually enabled. Android Marshmallow introduced a slick feature called Doze, which puts your phone into a sleep mode when you aren’t using it, saving battery. Some pundits have concluded that battery life was the major focus of Android Marshmallow (M). Android had previously introduced a standby feature for apps, which reduced the amount of power apps running in the background used. These two features in tandem greatly extend battery life for the average user. At the end of the day, both operating systems have a battery that, under moderate use, will last for the day.

iOS has always been at the top of this debate when it comes to privacy concerns. You can only install apps from iTunes, and those apps have to be approved by Apple. Not much has changed in iOS9 in that regard. Android, on the other hand, lets you install apps from a wide variety of places. This, of course, has its own associated risks. Android M has borrowed app permissions from iOS, abandoning the previous all or nothing permissions approach. There are now eight core permissions apps can request, a change which has largely been praised. Neither operating system has major privacy concerns we are aware of. Apple fans do like to point out that Android does some “creepy things,” like scan emails and other data on your phone in an effort to better provide information you are looking for. Some find that a little unsettling.

Android M’s slogan is “Android Marshmallow: S’more to love.” iOS9 does not seem to have a slogan with a pun in it.

As you can see, there is no wrong choice in deciding between an iOS versus Android device. Both systems provide sleek, well-performing interfaces, substantial computing power, increased battery life and a buffet of apps. iOS shines in battery life and privacy, while Android’s customization options greatly overshadows Apple’s. Both systems perform, and there isn’t a strong reason to switch devices based on the operating system. If you are choosing a new phone, ask your friends how they like their devices. Bottom line: if you like your current OS, then stick with it.

If you are looking for iPhone and cell phone deals this Black Friday, we will be collecting them in one central location for you. We also have a whole section dedicated to Black Friday, where we keep all the ads, news, insights and deals. Check it out.