Once again, Meijer has three times the Black Friday fun in store for shoppers this year! We’ve posted all

three of their ads for your viewing pleasure: the Thanksgiving ad, the Black Friday ad and the Saturday ad. The store opens at 6 a.m. on all three days, so get there early and shop often!

Some of the great Thanksgiving doorbusters include 50% off Beats 2 Solo Headphones, BOGO 50% off Shopkins and a 49″ Element 1080p LED HDTV for only $169.99. The ad also features many great deals on video games, TV series and movies, including Assassin’s Creed Syndicate

for only $40.00. There are a lot of great toy deals as well, such as 50% off Barbie Fairy Dolls or Star Wars Galactic Heroes Figures and BOGO 50% off Disney Frozen Princess Toys or Minecraft Playsets.

The Black Friday ad features a slew of incredible deals, including 50% off Princess Sparkle Dolls, Buy 1 Get 2 Free Carter’s Sleepwear and BOGO $1.00 Kids Cold Weather Accessories. Also, get great deals on home products, like 50% off Olympia 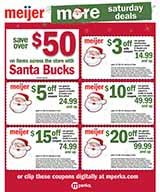 Truly, Meijer is a must-see destination this Thanksgiving weekend. So what are you planning on buying?

your fortress of Black Friday solitude!