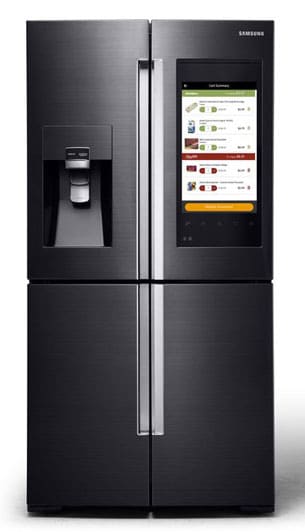 A sea of phones backlit the Samsung Consumer Electronic Show (CES) conference Tuesday afternoon as COO Tim Baxter unveiled the newest items rolling out in 2019. And while I expected the usual TV, smart watch and tablet announcement, all roads led to fridge today.

Well, a smart fridge that is.

As the stainless steel finishes on refrigerators became more popular, we got rid of the kids’ artwork, family pictures and those weird magnets you pick up every time you visit a new country.

The new Family Hub Fridge is a thing of beauty. It’s refrigerator as showcase: order and pay for groceries via the 21.5″ Gorilla Glass touchscreen panel, which covers most of the upper right door and brightens up automatically whenever the sensors detect you drawing near. For now, FreshDirect and ShopRite are the only stores integrated with the shopping app, but Samsung is working to add more stores. There’s also a companion smartphone app for on-the-go orders. Left your grocery list at home? The built-in cameras take a photo of the fridge’s interior every time you close the doors, so you can pull up the most recent photo and notice you’re low on milk. No more forgetting an item or buying duplicates.

There’s also TV mirroring, so you can watch your favorite show while making dinner, or leave the game on so you don’t miss any action while running to the fridge for another beer. You can manage your food prep, play music, display a family photo or leave your children a note reminding them to walk the dog.

Yes, it’s a $5,000 fridge (available this spring). We’re sure the prices on these smart fridges will continue to drop, so if you’re not in the immediate market for a new fridge, hold off. I am lusting after this bad boy something fierce, but until then I suppose I’ll keep typing my grocery lists out on my phone like the peasant I am.

Samsung also unveiled a new SUHD TV yesterday with 1,000 nit HDR Quantum Dot color. It’s the world’s first bezel-less curved design, is cadmium-free and displays up to one billion colors. There will be five TV sizes ranging from 49-88 inches and will feature reduced light reflection and a higher level of contrast. They’ve been the number one global TV brand for a decade and have more than 20,000 developers working on their Samsung SmartThings kit.

“We started working on a smarter life five years ago by looking at how to make products smarter and better able to connect and manage lifestyles,” said Samsung Executive Vice President Joe Stinziano.

At CES 2018, Samsung announced that all of their TVs would be Internet of Things (IoT) ready by 2017. This year they announced their USB adapter for SUHD TVs to control IoT via the SmartThings platform which can control more than 200 devices from home appliances to baby monitors. It will be available free of charge to every customer who purchases a 2016 SUHD TV.

Samsung is clearly looking to address consumer pain points, and along with their new TV models, they announced the Samsung SmartHub. It can control video game consoles, your set top box and DVR. No more navigating to an outside app, and sporting events will be included as well.

OTHER ITEMS OF NOTE: