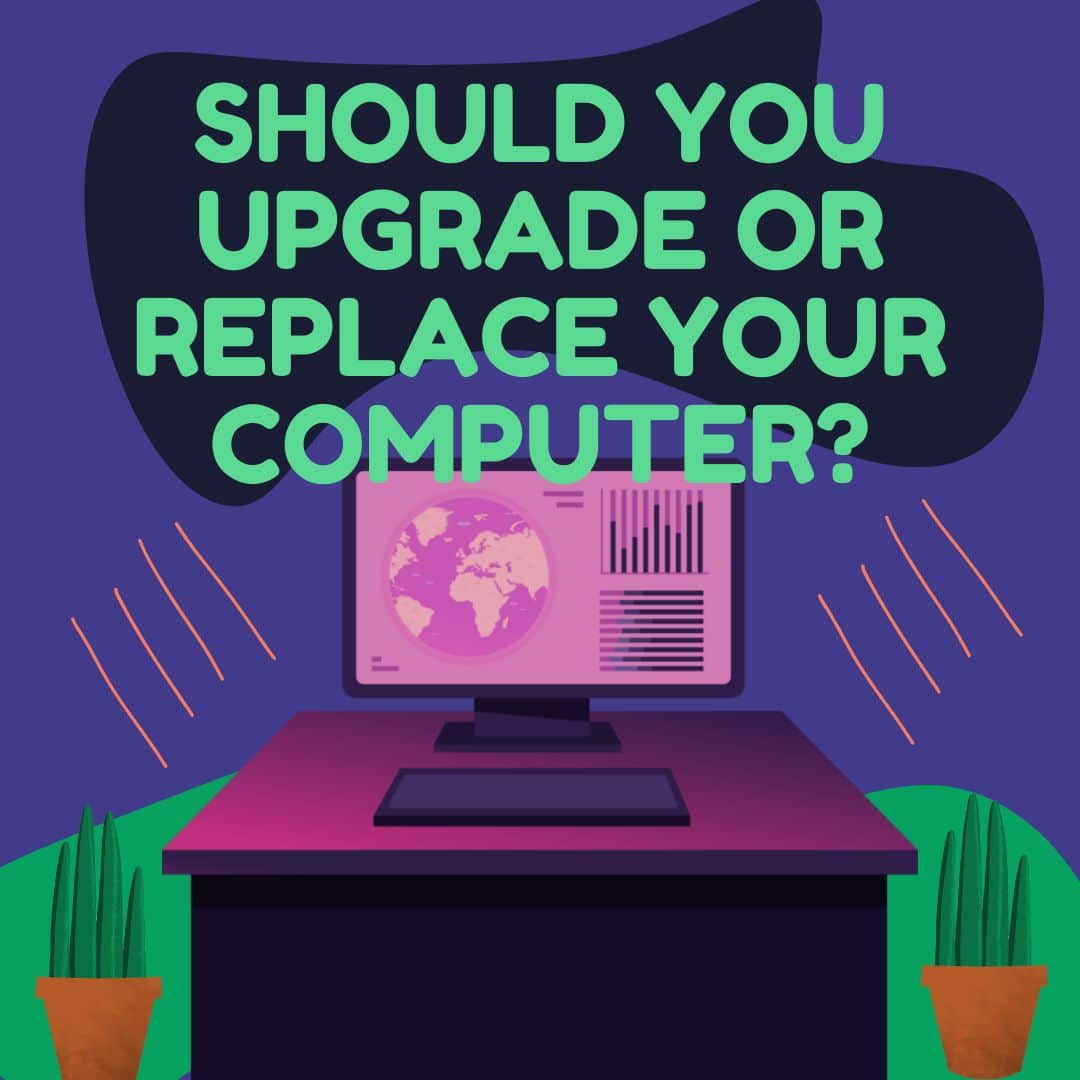 At a certain point in every computer’s lifetime, you’ll ask yourself, “Why am I still using this crap?” You won’t know the answer. In all seriousness, a time will come when your computer isn’t doing it for you anymore. Either it isn’t fast enough anymore (even after trying all the “tips and tricks” to make it run faster), you can’t play the newest games, or you want to multitask a bit more. Your RAM can’t handle it (or you want to have multiple tabs open in chrome, AKA the RAM-eater). No matter the issue, it would help if you had more computers. The big question is: should you upgrade or buy? Here are all the tools and tips you need to choose which is suitable for you.

When buying a new computer, there’s usually not much you have to do. The drivers are installed, and all you have to do is “plug and play.” The great thing about this is that most people can do this without any assistance. The basic setup should be easy with the prompts (assuming you’re using basic Windows/Mac OS).

New computers usually come with a comprehensive warranty, covering all or most parts when used under normal conditions. While you can get warranty coverage when upgrading parts, the contract will not cover other parts of the computer that may fail. Also, if you buy a new computer and more than one part fails, you can get both fixed through the same company. On the other hand, you might have to go through multiple manufacturers for warranty service when building or upgrading.

Here comes the part you may not be too happy about: you may have to wait. I know you don’t like to stay because I sure don’t! If you want to get the best price, though, you might have to. As much as it hurts, waiting until the right time to buy could save you hundreds of dollars. Some great times to buy are during Back to School or Black Friday sales. According to Consumer Reports, the best times to purchase computers are during April and October.

As stated above, know when to buy. That’s the best tip to save money on a new computer. Also, look for deals and coupons. Even during non-sale times, many manufacturers and retailers offer tons of deals and coupons on many products. Check out FatWallet’s Computers and Electronics categories if you’re looking for the best deals and coupons. You can also find great deals by considering last-generation pieces or even after a new operating system (OS) comes out. When Windows 11 came out, many manufacturers and retailers had awesome deals on the old Windows 10  computers. Since Windows 11 is a free upgrade, it’s a win/win!

Now, this is a pretty big “your results may vary” situation, but usually, upgrading will end up costing you less money than purchasing a whole new computer. Unless you’re sitting with a 12-year-old Windows 8 computer, you usually won’t have to change everything on your computer. If you built your current computer, you’d most likely upgrade it anyway, making it way cheaper and easier for you.

The great thing about upgrading your computer is that you can pick and choose. Remember a few years ago when you could go on a manufacturer’s website and customize almost every part of the computer you were buying? Unfortunately, many manufacturers have restricted or even totally removed this option. When you upgrade your computer instead of buying a new one, you can choose what you want and what you need to do it with. This allows you to select your performance, deals, and even your brands (i.e., Asus, Intel, NVIDIA, etc.).

WHAT TO CONSIDER BEFORE UPGRADING

When upgrading only some components of your computer, you could run into a problem called “bottlenecking.” Bottlenecking is when one part restricts the performance of another component (the component you upgraded). In this case, you must upgrade both components to achieve optimum performance. This often happens when people want to add more RAM, but their OS can only support a certain amount, which is lower than what they installed. To avoid this, make sure your new component will work well with all of your current details.

RAM is one of the easiest and least expensive upgrades you can make to your computer. Adding more RAM will increase your multitasking ability and allow you to run more memory-intensive programs like Photoshop and other creative suites. Since RAM is super cheap, most people buy more than they need. To figure out your RAM needs, check out our article on how much RAM you need.

To your computer, a new motherboard is equivalent to a complete home makeover (move that bus!). Your motherboard is the foundation of your computer, and changing it usually means you’re making significant changes elsewhere. The most common reasons to change a CPU are using a different socket, adding more sticks of RAM, or expanding the slots for your computer.

The main reason for upgrading a CPU is, of course, speed. Usually, this is your last resort after upgrading your storage and RAM, but the computer is still not speedy enough for you. The CPU is like the brain of your computer, so a faster CPU helps everything move faster. Remember that unless your new CPU uses the same socket as your old CPU, you must also replace the motherboard.

Upgrading your storage is another quick and easy upgrade and can significantly affect your computer. Usually, upgrading storage will mean getting an SSD (solid state drive). Installing an SSD in your computer can result in one of the most significant upgrades in speed at a shallow price point (depending on SSD size). Even with a smaller SSD, putting your OS and a couple of programs on it could make your computer boot, and those programs open up more than 10 times faster. Still not convinced? Look at our SSD vs. HDD article for an in-depth analysis of the differences and what you can gain by getting an SSD.

One of the main reasons to upgrade your video card is, of course, gaming. Video cards are pretty much what drives the appearance of games and whether you’ll be able to play them. While gaming is the main reason most people upgrade their video cards, they also affect, you guessed it, video (plus, pretty much whatever else you see on your computer). This includes 3D video rendering, higher-end gaming, and multiple monitor setups (six monitors for “work”?).

WHAT WILL YOU CHOOSE?

With all that being said, the choice is yours. Is it worth it for you to upgrade your computer, or is that piece of junk worth a replacement? The classic time vs. money vs. customization.

Frugal Friday: STEM toys for kids at every age
Survival Guide to Thanksgiving and Black Friday
How To Make Money Tutoring In College
$10.00 off $25.00 JCPenney
4 Ways to Cut Expenses Without Leaving the House
Essential Gear Checklist: Road Trips
Booking.com Coupon $25
Should I Get a Tablet, Laptop or Desktop: An Essential Guide to the Differences
All Coupons
Recent Posts
Categories