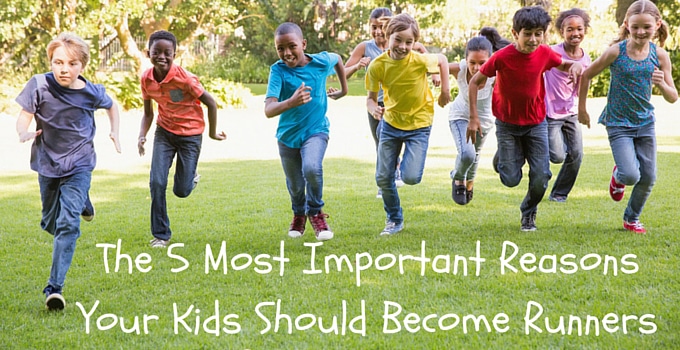 Running is a great, easy way for kids to stay fit. Sadly, many kids these days spend more time watching video game characters run than actually running themselves. This is tragic because running has many crucial health benefits that kids miss out on when they sit inside and stare at a screen all day. These benefits aren’t just physical; they are also cognitive, mental and social. So the next time your kids say they would rather play video games than go outside and run, here are some good arguments you can make to them about why they should be running.

As former Olympian and New York Marathon winner Rod Dixon puts it, “Nature made kids perpetual motion machines for a reason.” Kids are meant to be active; they were literally designed that way. We adults know this to be true as we think back on all of the energy we used to have when we were young. We know it doesn’t last forever, and that’s as good a reason as any for kids to be physically active in their youth.

Here are some of the many physical benefits that kids can gain through running:

So the next time your daughter says she would rather watch Netflix than play freeze tag, tell her, “If you don’t use all that energy now, you’re gonna lose it. And, believe me, you’ll miss it!”

All that energy has to go somewhere, and when kids don’t exert it physically, it can have problematic effects on their abilities to function cognitively. The fact is, running has been shown to improve kids’ abilities to perform in school. This is why an elementary school in Virginia recently decided to implement desks with pedals and swinging bars in its classrooms. One common thread Rod Dixon has discovered in schools that have implemented his KiDSMARATHON running program is that kids who participate in the program have higher test scores than those who don’t. This is proof positive that there is at least a correlation between how much a kid runs and how well he or she is able to do in school.

Here’s a list of some of the most important cognitive benefits of running:

So the next time little Timmy tells you he’d rather run in the virtual world than in the real world, tell him he’ll probably have an easier time concentrating on his video games after he gets out and runs.

Now this is a benefit I think all parents can get behind. Dealing with moody kids can be so frustrating, but you can ease that burden by encouraging your kids to run. Running is a great way to improve kids’ moods because it produces neurotransmitters — such as serotonin and dopamine — that combat mental illnesses like depression. Dr. Deepak Patel, a pediatrician at Icliniq.com, lists the “cheerful environment” that running can create for kids as one of the most important mental health benefits that running can provide. To put it simply: a happier child is a healthier child.

Running has also been shown to lessen the symptoms in kids with mental illnesses. Elite runner Natasha LaBeaud has seen evidence of this in her running program for kids, 2nd Recess. She recalls one particular instance in which a child with Tourette’s Syndrome saw his ability to manage the stress that would trigger some of his tics significantly improve over time as his running skills improved. Clearly, running isn’t just useful for staying in shape physically.

Here are some more of the mental health benefits of running:

So the next time your kids are in an emotional funk, tell them a little running will help lift their spirits.

RUNNING IS A GREAT WAY TO MAKE FRIENDS

Although running is generally considered a solitary exercise, it can still be a great way for kids to develop socially. When running on their own, kids gain self-confidence that will help them in future social situations. They learn that they can accomplish goals on their own and don’t need to be dependent on a group for their self-worth. This will make them less likely to give into peer pressure later in life and could save them from some potentially disastrous life choices.

But this doesn’t mean kids should only run alone. On the contrary, running in groups can also have spectacular effects on a child’s social development. It’s a great hobby through which kids can bond and form friendships. It’s also a great way to help younger kids understand the value of participation and instill a healthy competitive spirit in older kids.

One great way for kids to run in groups is for them to join one of the many great kids’ running programs around the country. Many of these programs are run by fitness professionals who teach kids the right way to run. What’s great about these types of programs is that they teach kids the value of both participation and competition by rewarding all of those who participate in their program while still giving special awards to those who excel.

Here’s are some great running programs for kids from around the country that are worth checking out:

These are just a few examples of the many great kids’ running programs around the country. So if you’re looking for a healthy and constructive social activity for your kid to be involved with, be sure to look for running programs in your area.

Finally, let’s not forget about good old fashioned fun! Think about all of the fun games you played as a kid that involved running. Freeze tag, capture the flag, red rover — why not get out in the backyard and teach your kids some of those super fun classics? It’s a great way to get some of that much needed exercise while also bonding with your kids. And it’ll teach them the valuable lesson that something doesn’t need to be projected on a screen or have a keypad to be fun. Fun knows no boundaries, so let’s get out and run!

These Smart Home Solutions Will Help You Save Big
SURVEY: Super Bowl Drives Most TV Sales
HHGREGG IS GOING OUT OF BUSINESS, LIQUIDATION SALES ALREADY STARTED
Azazie Coupon Code
Midwayusa Promo Code
Instacart Promo Code $35 off $50 off $100 off $15 off $20 off
Menards Black Friday Ad Posted
10 Simple Ways to Save Cash While Saving The Environment
All Coupons
Recent Posts
Categories