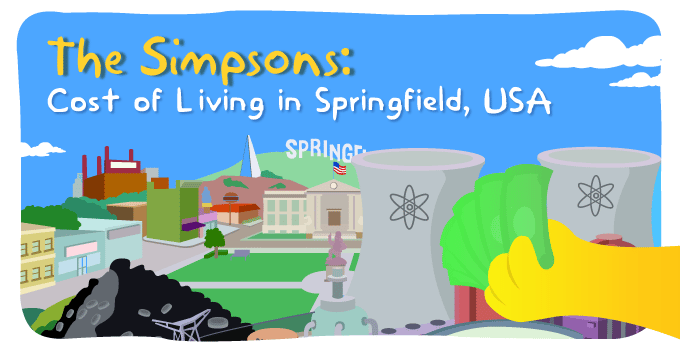 Ever wondered how much it costs the Simpsons to live in Springfield, USA? We did.

And since they never specify which Springfield they live in on the show, we looked at the top five cities (by population) named Springfield, plus one more Springfield that Matt Groening has alluded to might actually be where the Simpsons live. These Springfields are:

Our Calculations:
Homer’s salary:
We calculated the average salary for nuclear safety inspectors in Springfields.

Groceries:
The average monthly cost for a family of two adults and two school-age children is $1,290.60 if you’re on the “liberal” food plan (and we think the Simpsons would have to be, with Homer’s appetite). We added Maggie for $174.50 a month, the average cost of a “liberal” plan for a 1-year-old infant.

For Apu and Manjula, we estimated based on the “low-cost” plan for two adults and eight infants. (We figured with such a big family, they’d likely stick to the low-cost plan.)

Gas:
The Simpsons live close enough to Bart and Lisa’s school for Bart to skateboard home. We assumed they lived within walking distance of an elementary school in each Springfield, then calculated the mileage from there to the nearest power plant. Homer drives a Plymouth Valiant from the mid-1970s, which would average about 24 miles per gallon. AAA estimates the national average gas price per gallon to be $2.80.

Mr. Burns’ mansion:
We looked at the most expensive houses in each of the Springfields. (We only considered places with five or more bedrooms since Mr. Burns has at least that many.)