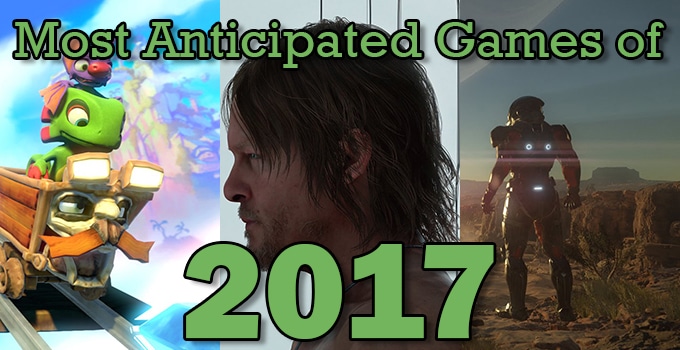 Being a part-time YouTuber, I kinda have to make it my business to know what’s coming up in the next year so I can budget for new games to record. With so many reboots and sequels and new properties slated for 2017, it was hard to pick just five as my top favorites, but I did it, and now we’re here. These are in no particular order, and I’m hoping each and every one of them does actually release in 2017 (you might remember my list from last year that had “ME: Andromeda” in it, too). Check it out!:

Originally slated for late 2016, this game’s release date has been pushed back to make sure it’s polished to perfection before hitting shelves. As a fan who was emotionally strained by the ending of “Mass Effect 3,” I can only hope that the team at Bioware has learned from their hard sci-fi mistakes and approached this new storyline through a true space epic’s lens. I’m definitely excited to be a space pioneer, and the revamped combat system looks to make fights more engaging and dynamic. Our friends at Green Man Gaming are looking forward to this one, too, with one of their feature writers, Rob, looking forward to “expanding the Mass Effect universe beyond the classic Shepard trilogy.” There is still no official release date for this game (although they say “spring”), so let’s hope it hits shelves in 2017.

“Death Stranding” has released two weird trailers, and both have vastly exceeded my aesthetic expectations. I’m not a huge Kojima fan in terms of his gameplay mechanics, but the “Silent Hill” series has some of the best horror art direction in the history of survival horror video games and I’m all about the spoops. Now, I’m mostly here for del Toro and the rumor that Ito helped out, but fans of “The Walking Dead” and “Hannibal” might be excited to know that Reedus and Mikkelsen are starring in opposing roles, as far as we can tell from the trailers. This game looks like it’s shaping up to be 2017’s weirdest, darkest addition to gaming consoles and PCs yet. There’s no release date as of yet, so we can only hope to see this in 2017.

I’m terrible at platformers. Like, really terrible. My depth perception is horrendous. But I am SO freakin’ excited about “Yooka-Laylee.” “Banjo Kazooie,” “Donkey Kong 64,” “Spyro:” all of those games were my childhood. While I’ll probably just end up watching my husband or my friend play this one, I am ecstatic to see the aesthetics and game mechanics of those classic games return to the mainstream. Games from 2016 like “Owlboy” really put me in the mood for a resurgence of old school style, and the fact that Playtonic is made up of former “Donkey Kong” and “Banjo Kazooie” devs just gives me more faith that this will be one of the best games of 2017. Rob at Green Man Gaming is also excited for this, saying

I played a brief demo of this back at EGX this year, and it is the perfect mix of nostalgia and great puzzle gameplay. This third-person 3D platformer is bound to steal the hearts of most if not all gamers young or old.

“Yooka-Laylee” will be released April 11 on PS4, Xbox One, PC, and Mac systems.

“Life is Strange” developers Dontnod Entertainment have taken a bit of a leap away from their original formula with 2017’s “Vampyr,” a third person action RPG that places the player in the role of a vampire doctor during the 1918 Spanish Flu epidemic in London. You’ll be faced with a moral dilemma: feed and kill to survive (and level up) or follow your conscience and keep your fangs to yourself. Dontnod is no stranger to gut-wrenching moralistic drama, so I expect to face some hard decisions in this Gothic trek through fictionalized post-Victorian London. No release date, yet, but the developers have said they want to release in 2017 and we can expect to see this game released on PC as well as PS4 and Xbox One systems.

Supergiant Games are masters of style, as evidenced by their previous hits, “Bastion” and “Transistor.” “Pyre” is their newest project, an even more unconventional RPG than its predecessors, feeling a bit like “The Banner Saga,” but without the hardcore turn-based gameplay. “Transistor” is my favorite game of all time, in terms of gameplay mechanics and story, so to see a new project from Supergiant is a dream come true. Blending an excellent, folksy soundtrack with a compelling text-based narrative (moving away from their voice-over narrative style), “Pyre” looks like it’ll exceed my expectations as one of my most anticipated games of 2017. No solid release date, but expect to see it release simultaneously on Steam and PS4, just like “Transistor.”

What Are You Looking Forward To?

Because we love y’all so much, we asked our forums members what games they were anticipating in 2017. The sheer variety of games people are excited for made it so we couldn’t include every comment, but here are the games our members are most excited about:

TheRedBaaron – “Legend of Zelda: Breath of the Wild”