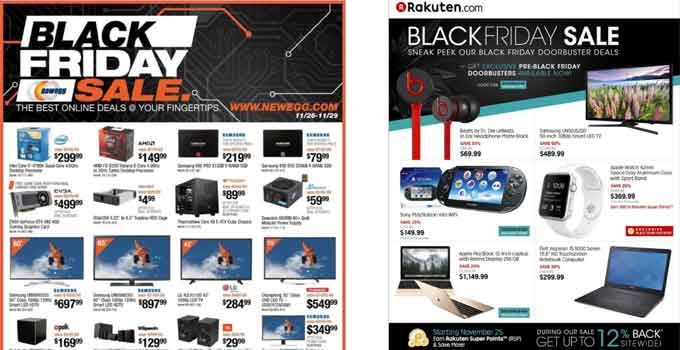 We’ve posted the Newegg Black Friday ad listing along with the two-page Newegg Black Friday ad scan! While Newegg is best known for computers and electronics, the retailer also carries video game consoles, sports gear, furniture and more. Some of the brands featured on Newegg include Apple, Nike, Michael Kors, Under Armour, PlayStation and Xbox.

You can also find deals on computer components, peripherals, monitors, and other tech gadgets in this Black Friday sale. FatWallet shoppers can get 1% cash back with their Newegg purchase.

One of the top deals we spotted in this ad is the Xbox One Gears of War: Ultimate Edition 500GB Bundle for $299.99, which comes with $50 back in Rakuten Super Points on top of the 12% cash back store-wide. Combine that with “Call of Duty: Black Ops III” for $49 on Xbox or PS4 for a super sweet gift for the gamers.Ready to shop now? Rakuten has some door-buster deals that are available right now. Some early Black Friday door-busters include:

To see other door-busters that are available right now, just look for the “door-buster available now” icon for eligible products.